An interesting read in it’s own right, but the particularly resonating paragraph follows this one. Keep in mind that this is an unelected EU commission/comittee that have legislative power over the entire EU. One of my major complaints about voting in the undemoctratic treaty -at the time people told me I was being anti-EU, which never was. Now we are stuck with this shit most likely forever now that it it’s been put in place.

“The commission sought to push ahead with the declaration by way of a written procedure after a meeting of the committee where there was no quorum. Under the “silence” procedure in question, the decision to make the declaration would have taken effect automatically if no member state had raised an objection by Tuesday’s deadline. “There will now have to be a full hearing of the proposal at the . . . committee where Ireland will be able to voice our profound concerns at such a proposal,” Mr Ahern’s spokesman said.”

Perhaps if Ahern’s lackeys had not been on the top of their game (e.g. there was any real political news this week in Ireland apart from the beginning of our great leaders’ 12 week summer holiday, or indeed that it had occurred within this schoolboy-style summer holiday) it would have gone unnoticed -as I’m sure many declarations already have [ please feel free to check this, I might sometime but feel lazy right now ].

So, as predicted, we now have;
-meetings of the unelected committee behind closed doors
-written, legally binding proposals stacked in volumes
-direct translation into EU law if noone bothers to read / object to them in time
-no recourse if anything slips through

On a more general note, the original Irish Times article also implies to me that Israeli interests have there own lobbyists in Brussels and that money talks. Is it in EU interests that we export work outside of the EU during recession times? 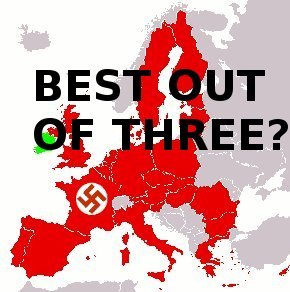 Sponsored by the Lisbon. Best Out Of Three? Campaign ;-)

One thought on “Remember The Lisbon Treaty?”