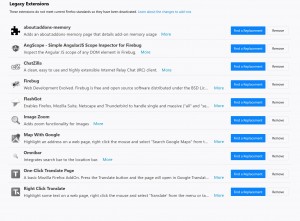 Not one add-on working. Fucking pathetic Mozilla. These guys really are hopeless. As an add-on developer I have suffered first hand at their underhanded, ill-thought tactics. There is a superior attitude among Mozilla developers, that everybody else must change to suit them. Just look at the history of gmail.com support on Firefox for Android. I have also received personal messages from Mozilla staff pretending to be users asking me to upgrade my AddOns to WebExtensions, or giving me bad reviews. These guys are assholes.